I had thought about the falls but not where the town around them might be or what it was called so Foz de Iguazu was small, a little boring and unkempt to some extent. 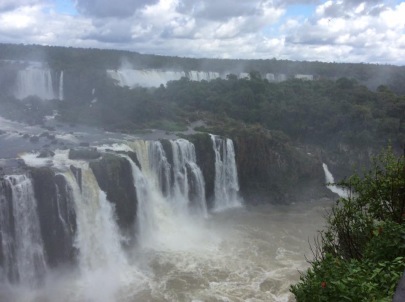 However, nice friendly people, and a taste of real life again that I always want to experience.

My first experience was landing at the airport, in the evening, having to find my hostel in the town and take a bus – again with no map or language!  A pattern here that I learned to adapt to.

Waiting for the bus, once I had sorted my head around which of the two buses out I needed to take without the help of a map, I talked to a young man who turned out to be so helpful – not only to me, speaking English, explaining the bus route and where I needed to get off and even, at the other end, sorting out a teenager at the bus station going my way who took me to my hostel!   How lovely of them both!  He also helped another young woman on the bus and took her himself to where she was going, hence he found help for me.  NO need to, but was helping us all as he spoke English.

Once there, it was basic, not very friendly and open but corridors, clean, safe and breakfast bar with buffet each day.

I had to find my way on day one there to the falls on this side – Brazil, and tomorrow planning to get to Argentina – for the day, as you do!

I ate that evening at a restaurant around the corner, finding my way around by wandering, and eating in the meat served at the table style of a Manchester place called Bem Brasil which I now understand!   Various meats cut at your table, according to the green card you  are given, and when you don’t want it for now or any more, turn it to the red side and they don’t ask.

There are salads and side dishes buffet style, all for one price.   And they speak Portugese Brasilian Spanish!   So the waiters didn’t speak English, one a tiny bit, but we made friends and they taught me how to say thank you, please and such using the masculine-feminine requirements which was lovely of them!  Obrigado or Obrigada I learned from them!

I got the bus to the falls easily enough, and it was spectacular.  I was here because Becca and Ruth had told me to visit, unsure in the jungle where I was heading, and told me to do ‘both sides’ of the falls – so vast they stretch over two countries and yet you can see the people on the ‘other side’ from there too.   Bizarre!

Coati at Iguassu Falls (see below)

The second day I had to cross borders, which even after so long travelling I wasn’t ‘good at’.  I didn’t get off the bus with my passport as I should have on the way out as I didn’t understand the driver and another family of tourists sat in front of me were unsure too.  However, I survived even though I could have been in real trouble, when the young man on the return journey over the border -where I did get off – asked where my stamp was, I said I didn’t know, and he looked frustrated and then decided to let me go without a stamp back in either!  No doubt, saving effort and paperwork and I probably didn’t seem a threat thank heavens!

Advice?  Find out the details, a few key phrases to ask the drivers at the borders etc!!

Now, the Argentina side of the falls was simply AMAZING!  Just beautiful, awe-inspiringly huge – high and long – with so much water over the falls and along the rivers, it looked like it could swallow the earth!  Rainbows lay over the waters at times, the spray so high and damping everyone around there most of the time.  Falls so deep below and so far stretching along the cliffs to Brasil from the wooden walkways built from entrance to end, through woodlands and little furry beasts called coati who would bite and injure and poison you potentially so many signs warning not to feed or touch them.

Otherwise, they looked for food, wandering around the walkways, on the fence tops above the rivers, along the walls and nuzzling near the restaurants where weary workers tried to shoo them off all the time!

It was a long but lovely walk through the falls area in Argentina.  I had realised late that I needed money so the hostel gave me the money and I had to work out costs and coins to pay!  Another thing I rarely considered early enough at times but a habit in the airports to pick up some for at least day one or the whole stay there.

I liked Iguassu though, and my stay was nice if brief, and the restaurant, mall and banking new for me.  Not much else to see there.

My next trip was to move to Curitiba on my way to Rio de Janeiro in the east, near the coast.

The largest rodent in the world, the capybara, prefers a habitat of dense forestry and bodies of water. They live in social groups ranging from 20 to 100. Adults grow to about 20 inches tall and 4 feet in length, with brown-reddish fur. They feed on grass, tree bark, plants and fruit. Consuming their own feaces provides them with a source of bacterial gut floral that aids in digestion. Although they can live up to 10 years in the wild, they are prey to many predators. Their predators include anacondas, ocelots, jaguars, pumas, caimans and eagles.