I share links at weekend on my coaching site as inspiration for people to ‘live your dream’.  This week in October, my memories were stirred by this perfectly-timed read on Nomadic Matt’s blog with my alarm reminder so it was apt to share those memories and yet to do the pictures, on http://www.clearmindco.co.uk.

Remembering my weeks in Laos.

A place I’d hardly heard of – unsure of the pronunciation so likely had only seen the name in print – I was ‘in the area’ so decided to check it out. And oh, so pleased I did! I fell in love with it.

The slow paced life, the cheeky shake adverts and the openly ‘hippie’ chillouts everywhere – and the reggae vibes in the bars.

I got there by taking the slow boat down the Mekong from Chiang Mai in Thailand (which was mentioned) via  a couple of small riverside villages – the first with little modernisation but a phone and cash machine for tourists, lovely little restaurants on a walk up the only street – and  the locals  living in wooden huts on the hillside, dressed in rags near enough.  And rip off hostels with noisy Germans on our trip!  But an experience and in the end, turned out to be nice people.

Told to check out the elephants at the river at 7am to wash and drink with their mahouts, my new friend, we did prior to moving on that morning further on up the river.  Today, a full 7-8 hours on board a boat with only seats, little room to move around, open sided and by then she found a new friend from Holland to sit with.  It was OK.

There was an older guy at the back – I find later, smoking weed with the young ones, and often chilling like this on holidays from the USA.  How did I find out?  We met in the market, whilst having a cool drink as he passed by.  Stopped, chatted, we had a drink, chatted then drank wine at an air con wine shop he knew in Luang Prabang where we had been headed, on into the evening one day …

On to Vang Vieng (also mentioned) which was an oddly quiet town whose history I didn’t know but has become important to me now  knowing someone living there – a monk, Somsay, my FB friends met in Vientiane, the capital. (mentioned, more posts in my blog).  When I met them and was chatting, helping their English lesson too, I mentioned I’d been there and he said he was from there, longing asking about what I thought, telling me he’d been away from his family for many months.

On NY Eve 2017 into 2018  by chance he was online and asked to chat.  We ended up chatting via messenger video, he showing me his walk at 6 am from home to his sisters, around her house and hello to her, and the mountain backdrop I remember so well.

The article also reminded me of my visit to Don Det and it’s many water buffalo tied up on the house-farms, in the fields and walking along the side of rice fields – in the daytime exploring and one dark night coming back from eating out and deciding to explore, with two small torches between the two of us.   We walked into a swarm of fireflies by accident – something my companion from Aus had wanted to see – and it was very pretty.  We almost got run off the path by a motorbike without lights and an uncertain step by step back to ‘civilisation’.  We were never really that far from it on an island you can walk around literally in a couple of hours! 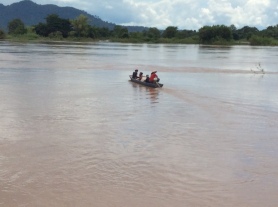 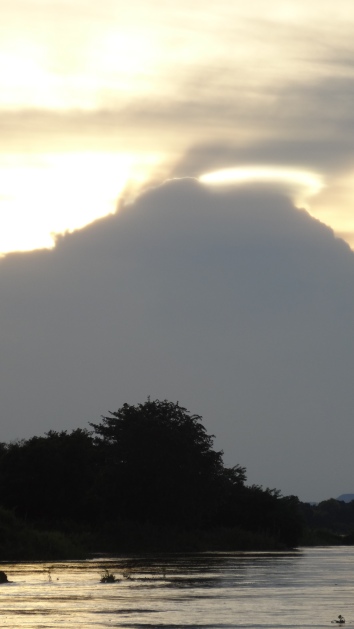 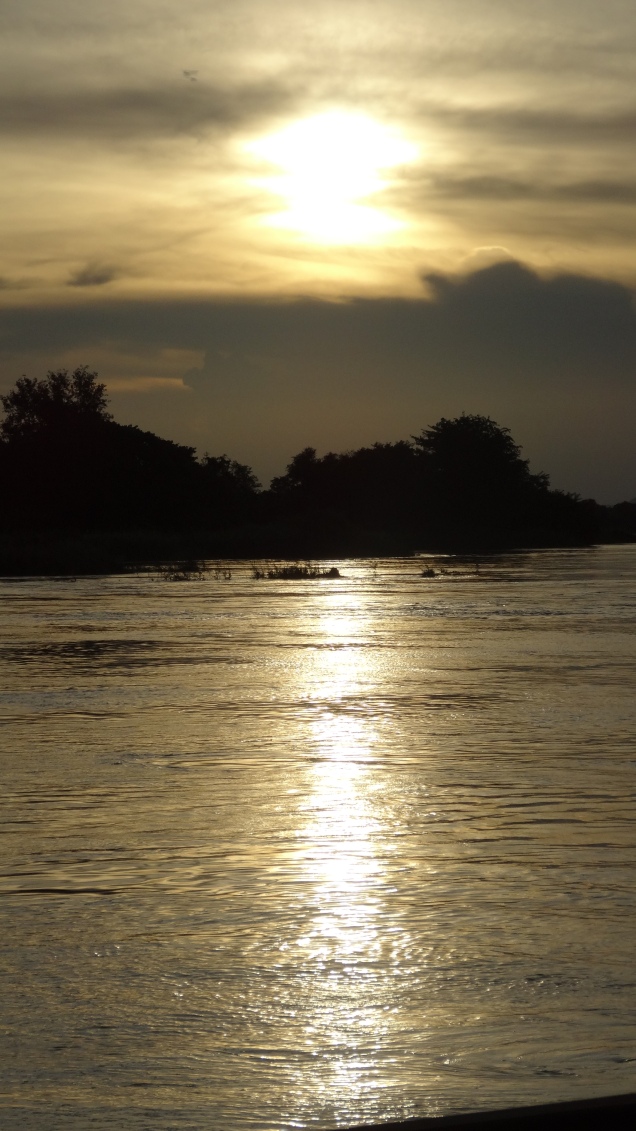 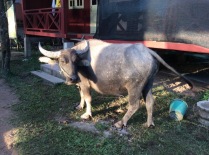 A school at one end, and the village, the ‘local garage’ for fuel was a wood hut and tin roof, with bottles of yellow liquid on the window sill front at the edge of the path.  We stopped for a refill on the bike/side car we found was our run across the island to our engined boat a the other end from us when we booked a day trip with a young man whose dad was to take us in his ‘taxi’!  From there we saw pink dolphins popping up around us in the middle of the estuary, then our engine failed having got clogged by floating vegetation – being pulled down this rapidly flowing river to who knows where!  (We found out later – scary!) Luckily these two men, our driver and guide older, paddled against the strong current to land, and a half our trek through the jungle settlements (not even a village size) where we greeted with smiles and questions for our seemingly-familiar guides!   It was fun, and exciting, and ‘interesting’!  From there we were taken by small boat across the river to the mainland, and onto a bike/side car taxi that fitted us both (on the ride out I was on the back of the taxi driver!) and we raced, literally again, under storm clouds and thunder/lightening to a national park to see the waterfall there.  Arriving just as the rain began to fall, we walked quickly to the lookout in the park, donning waterproofs always carried along with suntan cream as a traveller!

Arriving just in time before the heavens opened and sheltered in the open sided look out with many other visitors!  Noisy children tied in one space, adults bored of waiting it out, myself and friend taking photos – yet my phone-camera wouldn’t work in the wet, and I have lots of her pictures from high-level camera work and of course, her ‘go pro, she videoed our whole trip on through the storm.  Apparently in Australia she is a storm-chaser, so loved it!  I was a little more sceptical but enjoyed the race, the giggles and the biker winding around the many potholes, loose stones and trucks and cars, or bikes coming our way!  He thought we were mad, kept looking sideways at us laughing, and her excitement and really not wanting to drive so fast in the torrential rain due imminently from the dark skies and coloured clouds above us! That waterfall was torrential too – vast amounts of water throwing itself over the edges and cut outs it had created to escape the river bed and rocks into a deep cavern carved out over hundreds of years, filled with water from many inlets!   Rushing further on, into the next strong river run beyond!   (This is where we were heading when our engine cut out …!)

Those ever-swiftly  running waters surrounding this one island of “4,000” tiny sandy isles and three main consistent islands  when the waters drop in ‘summer’ –  Don Det the fun traveller one, mid way between a small quiet one and larger adult one I think!

Then on to the stunning Kuang Se waterfall and bears, too, and Viantiane and eventually Cambodia via small towns visited en route …