We drove from their lovely house on the hillside in this sea side town, down to the harbour where Cruzee was moored.  The house where I stayed for a day or so with my sisters’ friends who I had met many years before in my 20s!  I was then to go for a week’s sailing trip around the Bay of Islands with Bernie on Cruzee her small boat, to see from the water the annual celebration of Waitangi Festival and the signing of the treaty between Maori and British (where they obviously got ripped off a bit!)

We boarded Cruzee for a few days that ended up being a week, then I think Bernie needed her space as she often took her boat up to visit friends and sail the oceans alone!

My bedroom on board, rowed to a little cove off Russell, swimming in the quiet bays

But it was certainly and unexpected adventure that I will forever treasure!

Mountainous seas at times, a lone penguin floating by the boat in the middle of the ocean (and answering my question as to how they ‘stay out at sea for three months or so to get food’), islands, boats and fantastic yachts, headlands and lighthouses, coves and beachcombing, learning to row the small boat and get to and from shore safely in sometimes inhospitable weather!

Seeing a 3000 year old tree called Tane Mahuta, Spirit of the Forest, that the Maori’s treat with respect they have for nature and power; the Old Man of the forest I missed on this tour who is 4000 years old!

I visited Russell and Paihai by ferry too, saw historical churches damaged by gunfire and the churchyard of 19th century graves of the first British settlers in New Zealand who fought at times with the Maori over land and possessions.

Bernie at the helm, drinks in Russell listening to music and relaxing, Bernie & I ready to board Cruzee for a week long sail in the Bay of Islands!

The Maori are not indigenous to New Zealand i.e. they too discovered it and then inhabited it (discovered but not settled first by the Portugese that happened also in South America!) and they have only been there on the island for 800 years!   The British in the 1800s.    Before that the whole of New Zealand was inhabited only by birds or flightless birds – no other animals or mammals on land at all!

This fascinated me and the museums told the stories, pictures and ‘statues’ of these 6-8 foot flightless birds that used to roam the forests but were hunted to extinction by the Maori.  Although not an extensive settlement of these people, they need a lot of land and food and settled mainly in the warmer north Islands with only one tribe inhabiting and settling the south island at the beginning. 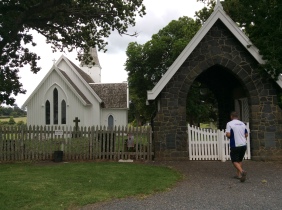 The Maori cultural shows are well worth the visits – to see demonstrations o how they lived, the battle cries and the dress and culture.  At city museums, evening tours with food cooked underground as they used to that was delicious, and dancing/family life demos too.   I loved it! 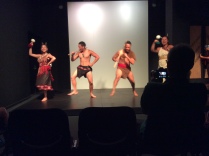 Maori culture demonstrations in museums or tours and evening meals like Mitai,; showing games like poi, songs and battle practice, battle cries like the Haka so familiar with the All Blacks Ruby Team