Auckland Harbour from the harbour cruise to Rangitoto

I travelled from Auckland after a few days, where I made some unlikely ‘friends’ – two guys I started chatting with in an Irish pub on the steep road through Auckland on about day 2.  Hoping for some later music, they told me about another pub up the road and I went there with Pat (no, born and bred and in NZ, looked like an orc but a lovely guy!).  His pal, from Wales, was a little wild looking, had settled there many years ago and met his partner.   He didn’t come with us, just calling in for a drink with Pat.

Up at Father Ted’s, another Irish pub and love the name, he introduced me to the band of two – one looked like a regular Hobbit and the other like ‘a hobbit from over the hill’!  Maybe it was the drink (I had far too much!) but I enjoyed the evening immensely, met lovely people and had music too that I like!  And I dragged myself back up the steep hill to my hostel room and slept. 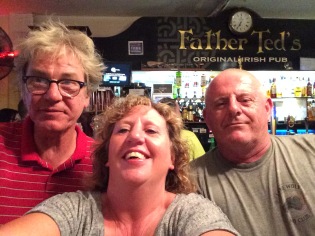 Father Ted’s with Pat on the right, and the buy from Wales & also the only band to play in Hobbiton’s Green Dragon Inn are Gerry O’Neill & Jono (above left) who make up the band of The Grail

The hostel here was two or three rooms connected by a teeny kitchen with sink, kettle, cupboards and an entrance door, then the room doors off there.  Very cosy!  Although I didn’t see much of the others, and even sharing the tiny shower/toilet didn’t pose too much of a problem.  People tended to stay a few days, like me I guess, and it was right near the University area so no doubt some students in parts too.

I visited the tower but didn’t go up it as not worth the cost to me; I wandered the streets, found the library and the Starbucks across the road for wifi (not in the room, some on my phone eventually).   I found shops, bars, supermarkets and lots of traffic.   And people sort of spoke English – but very peculiar pronunciations that people tried to teach me!   “Chups” not chips etc.

I did enjoy Auckland though.  I got to do a harbour cruise and see the yachts, speed boats and lived on boats, the stereotypical volcano across the harbour that I actually visited too – travelling around with a guide who lived there, on the black, lava rock island – by tractor-driven ‘train’, and saw the many trees and flowers that have fought their way through the rock, adapted to minimal water as no soil, and the rough terrain that tears boots and skin alike!   There are birds here and a few animals but in the main they are pests and they are trying to cull them and clear it and managing it for the most part!  People are employed to travel over this rough land, hard walking up and down the rocks, to find and remove pests like possums and ferrets that kill indigenous birds and things. 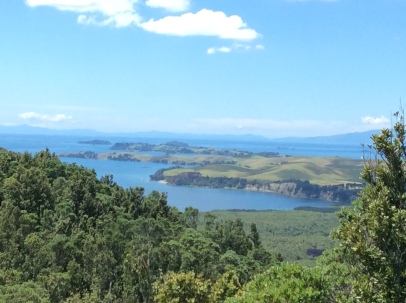 Auckland’s tower and main street, the view from the volcano island Rangitoto

We climbed up to the top of the volcano, over man made wooden platforms that became the norm in NZ in the forested areas, and the views were magnificent!  But it was a hard climb, and at one point I encouraged some tired and bored young people to keep going up to see the scenes above!   Our group were friendly enough but not chatty all the time but I enjoyed the visit and history – learning about ‘bach’s’ – small wooden huts built in the 50s for single working men who were cleaning the island and building roads.   These are now holiday homes or year-round homes for some and we got to see in one as it would have been.

Black volcanic lava hardened over years and water, as we arrived at Rangitoto island in Auckland harbour and it’s classic shape