I can’t believe I’m here, after so many years wondering!    So guess where I am, today 16th April for five nights and days?

I am in the Amazon jungle!!!! Through creeks to the lodge area of several stilted shacks, with tin rooves, two larger grass- roofed buildings housing dining room and hammocks.   My view from the back of my room, three beds but just for me, is palms, grasses and bushes.   I have an en-suite bathroom which is cool if basic but it is in the jungle!!There is netting around the top of the wooden frame to keep out mosquitos, and I brought my Deet repellent spray plus my usual daytime one.  I started malaria tablets -Mallarone – when I set of for Iquitos, just in case. 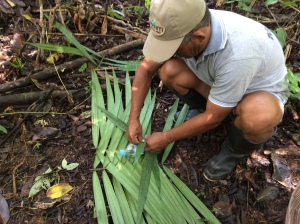 My first guide, Ashuco, making a water bottle holder from palm leaves for Sue as we trekked the jungle paths to explore the wildlife …

Somewhere I’ve ALWAYS wanted to visit is the Amazon!  It looks to wild, exciting, dangerous a little and vast with so many animals and birds too many to count!   Always watching geo programmes on this area of the world, the sad loss with deforestation and the devastating effects this has on the world we live in…

I forgot it last night going out for dinner in the town but seems ok, one bite but not bad – maybe not mossies but little black flies. Off soon for our second trip to Monkey Island to see monkeys, birds, snakes and iguanas.

Our first adventure was geting here by boat up the brown Amazon, two different coloured waters flowing together from in Intaya river too. Saw the yellow headed vultures circling above the trees, reddy brown kingfishers who live in long holes in the banks, then visited a place with caiman, turtles, piranha and a huge big mouthed fish too, and a couple of macaws.

We saw villages and petroleum boats and camps, little huts and locals going about their daily business in small motor boats, It reminds me of the Mekong but less mountainous.

Amazing day in the Amazon!!!!  After lunch at the lodge, we went out 3-6pm to the rescue site Monkey Island, where monkeys and other animals are set free after black market trades. There were woolly monkeys, squirrel monkey, capuchin monkeys too.

We saw a 6ft Anaconda slithering to freedom after just arriving, whilst the other was in a pond with only his face out!! There were several species of monkey including the large, lanky spider monkey and tiny cream one.   There was an Amazonian racoon that tried to climb up my leg at one point, and he was cute!  Cuter though was the baby sloth we all got to hold – he was like a baby, arms round my neck and shoulders, legs hooked round my waist and apparently sleepy eyes whilst on me!!! So cute and cuddly, like a baby with sharp claws that didn’t want to let go!!!!

One woolly monkey found a plastic bottle, unscrewed the lid, lent down from the boats moored to put water in it, then reseal the bottle!!! Very clever… 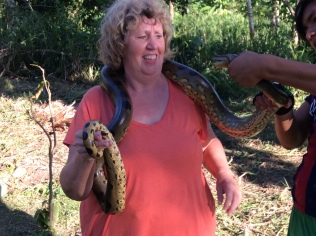 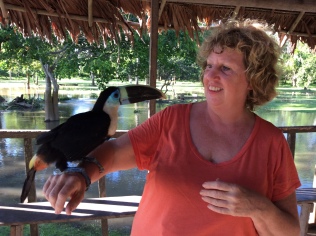 A six foot Anaconda around my neck, and a toucan on my arm!!! Who would ever have believed – not least me!  So cool!

There were green red, blue and turquoise mackaws and a toucan under the hut!!!

It was so cool to see all these animals!!!! Then we sailed off to look for the pink dolphins and saw several; they are quite big and really pink!!! We sat in the boat watching the sun set and the birds – white herons settling on the edge of the lagoon for the nights, lots of white terms in the trees opposite, and smaller birds including the brown kingfisher.

Watching dusk descend and then sunset was just superb!!! Quite moving and stunning colours from red, yellow, blue and purple.

After dinner of catfish and salad, sweet banana, people chatted, Ashuco came to sit with me.  He was impressed at how excited I was over the sunset and the Amazon, perhaps!  It’s so peaceful, and relaxing here on the Amazon and so beautiful, under the sunset or the stars, on the water, amongst the jungle…

Came back to hut, under mosquito net which was a tight squeeze!  ooops need to get me torch for toilet in the night!! And water, and spray just in case, and my towel as an extra cover when my arms get cold…

Due to be up at 5.30 am for bird watching outing 6 am tomorrow it seems, then breakfast back at camp and chill before the  next trip!!