When we camped, which is usually the last night of the tours – hadn’t been sure whether to go or not, and Susan and Tom had returned to Iquitos the previous day – I didn’t realise this and just thought I was going on a new jungle walk so didn’t tale anything like extra clothes! So the cotton trousers I Wore, with my only long sleeved shirt for mosquito protection, were all I had for a hot, sweaty walk through the village and jungle from the boat. Only when we were heading to the same place we dropped people for camping, did I begin to realise! Nearly at the camp, luckily, we stopped to see a huge 400 yo tree, and I bent down for something…and my pants tore! He tried to look how bad but I wouldn’t let him, so we carried on and then as I stepped over a tree log they ripped again! Nightmare!!! 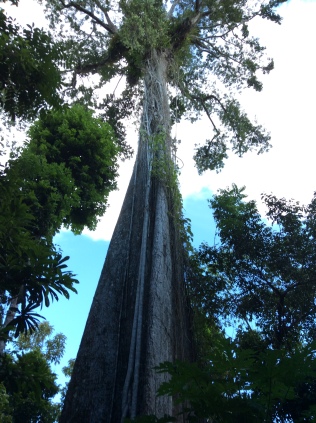 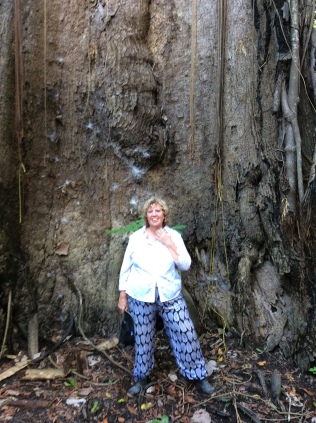 By the time we got to camp, luckily me walking behind him, I had no butt in my trousers!!!! He was chuckling, but I was sulking! He started to set up our beds and nets, whilst I found a cotton sheet to tie round as a sarong or skirt! He wasn’t impressed with the look 😬!

Just as I felt cooler then, he then told me we were off to the lookout, so I made the sarong into a skirt just tied round my waist and put on my sticky shirt again! We rowed out to the lookout – me looking less than cool in my skirt, from the look on his face! – and we climbed out of the small aluminium boat (again I didn’t realise at first this was not always flooded) onto the first level of the three storey wooden lookout, and he tied up the boat at the steps. I climbed up and he followed, and at the top, 45 foot up, we were above the tree canopy looking over to south east over trees and the dark lagoon and creeks below, to the western horizon where soon a beautiful sunset would develop, and to the southeast and northwest behind us looking down through trees into dark, still waters – it was stunning! As I took photos, and very excited, he gently moved me to the right …away from the tarantula in the roof above me!! I took a photo but was glad I’d moved as it was hunting and moving around!

We sat with out legs hanging over the edge, wellyboots off so we didn’t lose them (oh yes, turned down wellies completed my cool jungle outfit!). We chatted, he pointed things out, I just grinned (as usual, apparently) as it was cool to be out in the wild jungle with nothing and no one else around, almost alone!! He asked if I’d be ok now sling in the jungle, and I said yes, having got over my sulk, and seen the camp lodge and beds …and his trusty machete!!!

We watched the sun set over the Amazon jungle…then we had to go as it was getting dark. Really dark!

He helped me tidy my skirt, making a better fit, then helping me down the steps. as he rowed us back to the camp there was a full, or almost full moon, and stars glowing through the branches of the tall trees around us, and dragonfly larvae glowing like fairy lights on the grasses floating on the water all around us!! Just the lapping of the dark waters against the paddle, the frog noises and other sounds of the jungle, it was beautiful!! He shone the torch ahead and again, impressed he could find his way, especially in the dark!

As we arrived, there was music from the village; he said it was good at the village parties – then pointed his torch at my skirt, laughingly saying I was dressed well for a dance! It felt good to me, tighter and safer now it was tighter, so I just wiggled my hips at his comment! 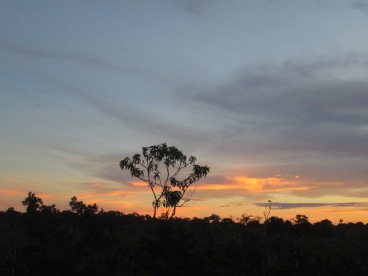 We both went to the jungle loo before bed – even though it was relatively early – and I slipped and slid in the mud, hiding in the bushes near the water to do my thin. Mistake! Later when I went, I made sure I was on firmer ground, and next day behind camp in the bushes before we left!

He saw me into bed – two mattresses as there were only two of us (I had heard it was hard with only one thin mattress and buggy covers from previous campers!) – and made sure the net was tucked in and no spiders around like there was when he was getting the bedding sorted from the pile and a huntsman sized spider was on there! He got into bed and just lay down and went to sleep. (I assume, as he didn’t move). I wasn’t tired as it was relatively early, maybe 7pm?? My watch was in my bag on the bench in the middle of the ‘house’ so not sure. I lay on my tummy looking out, through the ceiling to floor netting, at the lovely view over the water and the two boats on the shore, only about 15 feet away. The dark water, trees and ground visible in the moonlight from my left, frog noises and birds maybe, stars through the trees and so peaceful. It was lovely.

I remembered I had to take my lense out and get my water that I need to sip in the night, so slid out of the net in my sarong-cum- cover, and got sorted. Still no movement from Ashuco so at least I didn’t think I’d disturbed him. I hoped if anything scary did come he would wake up though!!

Later, however, other noises were a little scary, and Ashuco looked sound asleep so felt a little less safe other than being able to call him if I needed to! I needed the loo in the night, too, so luckily with my mini torch and the full moon I dashed out but stayed near the hut!

I slept, but woke a couple of times, sounded like something was in the hut next to us, another big ‘netted house’ on stilts about 4-5 ft off the ground, but no door like we had (although it didn’t close properly!). I thought I heard a panting go through the camp on my side but didn’t dare get up to see! I wish I had, and maybe sat up outside the netted bed maybe, but afraid of the many mosquitos I’d been told about by the other guide, Rene, just before leaving (and still didn’t twig I was due to camp!) I didn’t want to chance it, but I dud have my strong DEET repellent on.

In the morning we were apparently up early and at the boat again for six, and when we got there a young local was waiting to drive us back to the main camp lodge in a small motor boat. Ashuco got up and tidied everything away, sent me to the loo when we were about to set off – pointing his machete at the jungle! – although I was going to wait til we got back as I had to wear my pants again but with the sarong tucked in at the back. I felt and probably looked silly, hopefully thinking we might not see anyone as it was early – but they generally get up with the light, so we passed a few people through the village (but I didn’t look back!) The inly snigger I heard was as I got off the boat and walked the planks, and heard Ashuco quietly tell the guides there, I guess, I’d split my trousers the night before!!! Again, I just didn’t look back 😳!

After that, it being my last extra day for relaxing, I showered, breakfasted, and then lay in a hammock rocking, reading and chilling till lunchtime, then back to Iquitos and reality at 2pm, my jungle adventure almost over 😞

I was sad to go, and wondered about extending my stay, or coming back!! I asked about it and it was my birthday next day and I had hoped to spend it somewhere exciting like the Amazon but timing hadn’t worked, and then Ashuco said they would give me a good deal if I wanted to come back next day – and by the time I got to Iquitos, I’d decided to go back as my own birthday treat! 🍰😊

Ashuco was booked with another tour so I would have a different guide, and that was ok for a different experience, but would miss Ashuco’s company and expertise perhaps.