So there is the city of Rio de Janeiro and its four main beaches, and then at Paraty (para-chi) where there are other beaches I visited on a day tour.   The waves were crashing and it was dramatic, on rocky beaches all along the stretch from below the waterfall at Trinidade (trini-daje) at Cephilo.

I saved a fish today too! Went in the trip to the beaches ( really all one beach,,), walking along one with Jo the guide, she pointed out a beached fish gasping for water….so I picked it up, paddled in to the sea, and put it in deeper water but not above the waves and it scuttled off…😄

I paddled in the sea, walking along the length of the next beach, whilst one of the guys in the group  (William) went on quicker after working our way through rocky forst up and over a saddle from the second stop we had at the restaurant we would eat at later.

I was with three Brasilians, apparently sister and two brothers as I found by the end. She wasn’t in great health and older, and her brothers helped her in and out the van, she sat and waited for them to do their thing and at the end, although we couldn’t communicate that well, guide and driver either, we had a chat and a giggle.  I tasted cachaca – banana fire water 😜!! and they all knew so found it amusing.  William offered me a chocolate maybe based on this sugar cane disilled drink, which was like soft caramel. 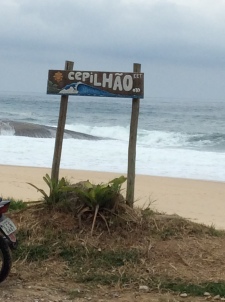 As we returned to the others who had waited on the beach, (Carmen was unable to walk far, and Sergio stayed with her) I went fir a dip in very strong surf, and got knocked under.  Jo called me out of the water, but I’d had my dip and felt cooler.

I managed another swim later, and William dipped too, where it was calmer. thenwalked along the path and beach t the restaurant for a long lunch.  I just had a ‘snack’ (lanches) of fried fish chunks which was delicious, and rest, as the S Americans do, had a large heavy lunch.  But I had a beer this time (they had one earlier) and William raised his glass to me again, saying cheersin Portugese.  Nice people.

After trying to comminicate in the van, telling them about my children and travels, them saying they were ‘familia’, and at the end Carmen ‘loved’ me, and we hugged.  It’s funny how you can warm to people and learn about them without the same language, or just idd words and gestures etc. 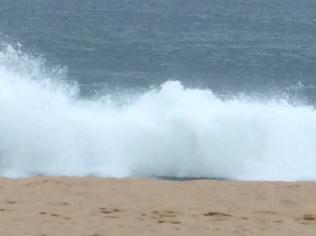 I got there names when I asked William to write down cachaca but he misunderstood!  When we parted, her brothers William (very cool in his sunglasses and quite attractive)  and Sergio (funny and hidden English talent!) shook hands and Sergio said I was ‘very good company’ – as I agreed they were too!

Such a nice, easy day on lovely beaches with amazing waves!! Got knocked over twice so not the cool water babe I aim to be …🐠💦