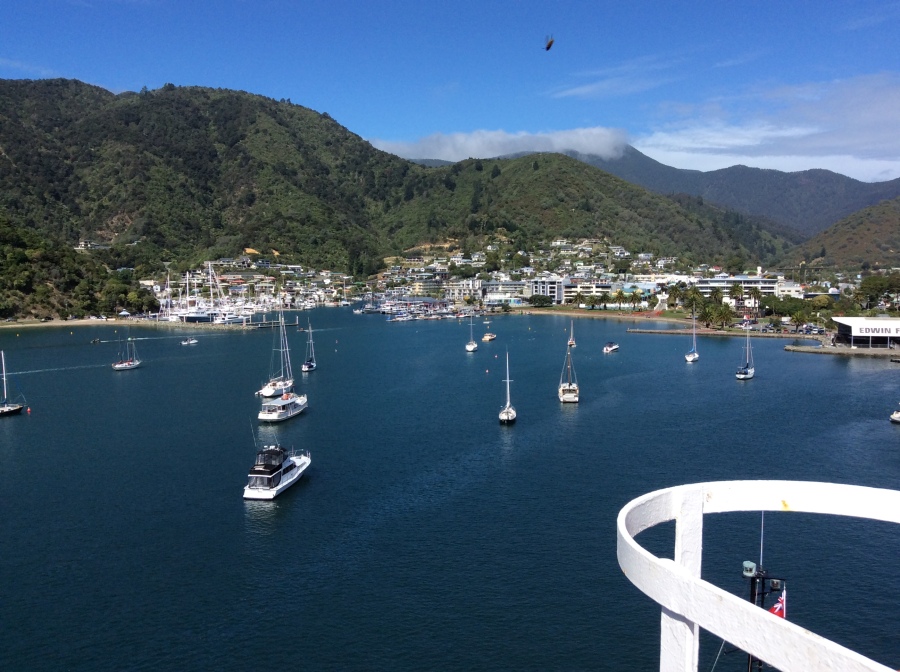 …is what I wanted to see on my travels this year, and today was another one.

It was silent on the ship, the ferry, as we glided through enormous bay sheltered by mountains all around.  We stood, grouped at the front, but hardly a sound as we all took in the majesty of nature at her finest.

Ahead of us, a small mail boat returning to port at Picton, travelling west toward the sunset in Queen Charlotte Sound, South Island, New Zealand…a boat I would later take a trip around the bay in*.

Blue mountains fading into the distance against a cream sky in the evening light, beneath long blue clouds; seven mountain levels deep at least, not including the fingers of land reaching into Charlotte Sound, hiding bays large and small, a house or two, sometimes more climbing up the hillside over the green waters.  It’s just beautiful!

“Beautiful” is a  word I used in my head and heard someone behind me use too – just sailing steadily towards the mountains in the distance, becoming larger as we neared them but the distant view seven layers deep plus the strong, dark points of land and an island stark against the light dusky sky was awe-some.  I could just stand there watching – at the front of the boat – and I did.

Now sat in the Thirsty Pig in Picton township, awaiting a chip free dinner (almost, as curly not chunky ‘steak fries’) drinking a cold beer, but warmer now with long pants and cardigan on, after the blustery trip from north island to south across the seemingly short distance between islands that took longer than we thought, and rougher too for some.

It had been a windy ride, out at sea and unable to see the islands that maps give the impression of being possible, a ‘short hop’ across, but such a change in temperature and culture.  From easy, relatively rich nature and people, lifestyles in tropical Bay of Islands – to the glaciated southern island more akin to what I am used to from the UK!  Cold, damp, windy and sometimes, grey.    More about the glaciated valleys later.

Sipping a welcome hot coffee to sip in the warmth of the cabin after blustery winds and water sent me indoors from the top (and maybe the American couple who seemed to think they owned the views from their precious seats), it was pleasant to watch nature change the view before me.

Children running down, sharing in the chit chat, catching up on news, sharing their personal stories and friendly, each and every one. 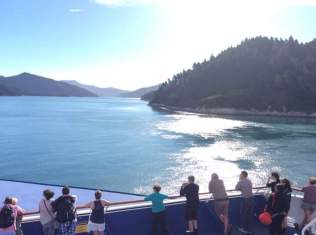 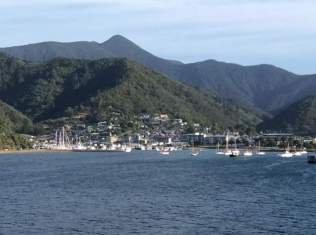 Such a small community in a vast ocean sound around Picton, itself a township – neiher village (too big) or town/city (too small) and buildings fewer than expected on the coastal edge of a beautiful sound.  No doubt, open to the ravages of weather and seas, yet eager to see annual visitors like huge whales coming to give birth, wander around the rich waters for food as they once did – before the whaling boats almost killed them off, and they were struggling through horrific capture and barbaric ways of fishing them, by rough and ready seamen, hardier than the hardest pirate I guess!

The sad history meant whales had avoided this safe Sound for years, but were now venturing back to find the horror disappeared, if not some of the machinery and camp ruins still on the ‘beaches’.