What to do in Santiago?

Most of yesterday, my second full day in this Chilean city, I simply sat in the Plaza des Armas (there’s one of these too in Lima, Peru!), in the warm sunshine that arrives later in the day it seems, around 2-3 pm. 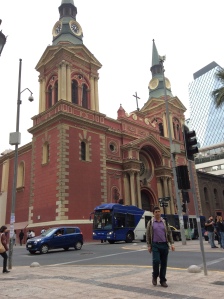 Why just sit?  Well, I was tired, physically perhaps still recovering from jet lag after my 11 hour flight from Auckland; which itself followed a three hour flight delay, and a confusing time lapse where I left Auckland, New Zealand at 6 pm but actually at 8.30 pm or later, on 31st March 2016, but arrived in Santiago at 3.30 pm …on 31st March 2016.   Thats weird isn’t it?  I think it is.  Even though I know why, and that it happens, when you experience it it is odd!!   So effectively I didn’t sleep more than 3 hours in flight, arrived daytime so stayed up until 10 pm but was soooo tired!

Anyway, back to the Plaza and people-watching, I noticed – like home – everyone is different but the same; people old or young, middle aged, slim or buxom, tall or short, hair colour, glasses, make up and hairstyles.  Maybe I expected them to all be dark haired, brown eyed (didn’t get close enough to check!) and medium build, good looking ….be dancing salsa or tango perhaps!! 😀 There were beggars, disabilities, regular people or those who stood out; a couple of prostitutes I think too, watching their style and behaviours, policemen and women with dogs, horses and motorbikes, and neat trolley bikes to move around on.

But I don’t know, it made an impression, a realisation that people are just people just with a different culture, lifestyle, language and attitude etc. and every one was different to each other yet the same sort of variations as other places.  This is something Ive noticed elsewhere too, that the world is not as different as I expected!  Except the scenery, the environments which are!

I watched men playing draughts on the trees along the puente, chess that I’d heard about on tables along the edge of the Plaza under the brollies, children playing whilst parents sat and chatted, young lovers and couples walking hand in hand, solo people or whole families, friends meeting, eating, chatting; the lady selling coffee and chocolate from a trolley she pushed, offering her wares to all. 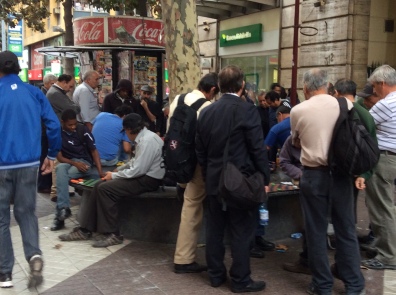 There were ‘statues’ posing and collecting money for their efforts as photo opportunities for many – a rose tree, a golden fairy witch, a copper miner and the white toga’d statuette.

The many pigeons searching for food and even two attacking a helpless, old or injured bird that I rescued, shooing the, off when I realised they weren’t mating after all, and put into the gardens long grass for safety from them and people walking into it, as it settled sleepily in the sun in the middle of the walkway, seemingly struggling to move far.  I checked a couple of times and it had crawled under the grasses to rest, hidden from potential predators.

Protesters or religious zealots calling on the audience to act, believe and think I guess but couldn’t understand them, although it got heated occasionally; noisy chanting football fans went through, the cabaniare watching and a couple followed on; the flag bearing protesters or sports fans moving into the metro, many people going down or coming up the various entries to the metro, here and on the ‘puentes’ (walkway avenues of shops).

It was full, lively, colourful and noisy but always interesting, developing and changing as I sometimes wandered the edges or through the centre for a new viewpoint. 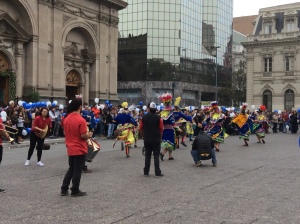 I ate at the cafe in the square again for lunch before this, choosing one of the pictured meals this time as I struggle with the language although I did more this second day, but still able to be involved, watch and listen to all that was happening around me.  Today I’d ordered food, was able to tell people I didn’t speak Spanish, ask for the bill and find my way or the toilet, all with limited Spanish phrases from my book!

Earlier, I visited Mercado Centro, the daily fish market and across the road, the fruit and veg market.  I bought my breakfast for two days – ordered 6 slices of ham (jamon) and cheese (queso), got the bill (la cuente), paid the cashier then collected my order again and went to find an apple but ended up with four as they wouldn’t sell me two (dos) but a kilo, and a kilo plus of bananas.  Maybe I was duped again, but it was only £2 each for the fruit and for the meat and cheese – just  $1970 or $2000 Chilean pesos, por favor.  I almost expect as a tourist to be cheated a little but I don’t like it and find it irritating, but can’t complain in Spanish (or Thai!).

I’m not confident in speaking other languages, but it gets easier over time, and now gracias, por favor and others are more comfortable.  I had wandered around, seen crowds, cars and traffic jams, heard horns beeping to get a move on or get out of the way -for cars, buses and pedestrians alike!  I crossed bridges over a trickling river in a wide concrete basin, saw churches in white, red, pink and sellers of bits and bobs like watches, clothes, toys and tools along the streets and bridge edges.

Always so much going on in this S American city.  Maybe this is how they all will be a I start my travels here, visiting next Peru with Lima and Cusco, and others; moving to Brazil’s Sao Paulo and Rio de Janeiro maybe then Buenos Aries in Argentina, possibly back to Chile but undecided as yet how my next five weeks will go… 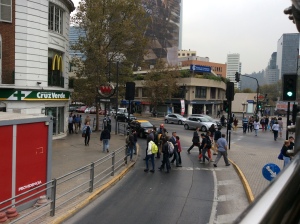