Well, Im on my way to Machu Picchu!! The Culmination perhaps of my year out to travel, this was the central point that the trip was built around! Wanting to get away from the world I wanted to go to the highest mountain in … Peru ( the most distant place I could then imagine, dramatic, isolated etc.

And now Im here. Perhaps mot the highest mountain but high enough at 3,400 m or 11,000ft in Cusco, higher at 3,800 m over the mountains back down to the need to acclimatise or suffer altitude sickness – upset stomach which I arrived with in Cusco anyway, sleeplessness, breathless, tired, headaches (which is the only thing I didn’t get)

how did the Inca get here through this terrain? And why, looking at the size of these mountains would they choose to build a city of 1000 people up there, to farm maize, wheat and potatoes and be self sustaining? They did have a science centre elsewhere to develop their farming knowledge, but that is down near Cusco, 167 km away. And then take 50 years to build it, and stay only 36 years before abandoning it in fear of the Spanish invasion. The Spanish though never got that far, and their move to the jungle edges for safety also only lasted 36 years. 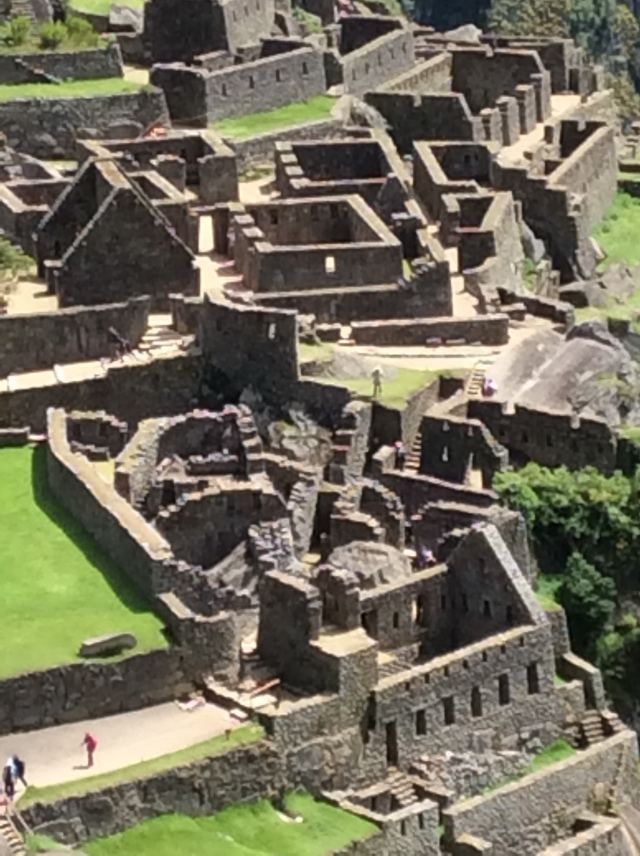 Although it was believed it was built to be nearer their gods of sun and moon, it wasn’t purely a religious basis for the city, with the farming, astronomy and other skills they used their. The king had his own en suite toilet area, they built water and drainage systems 7m underground and all around the city, using rainwater from surrounding mountains and directing it to their city (a nat geo programme said from two mountains away, using sidewalk channels and falls to pass water all through the city – as much as London has per head today!

It was so warm, but sitting in the sun nice, but to climb the many steps was hard, especially at altitude. The altitude really does affect people and some don’t realise the impact and put it down to something else, like a stomach bug.